I've created an account at Dreamwidth, with the same username as here: https://eledonecirrhosa.dreamwidth.org/

I'll keep this LJ account live, at least until the current Werewolf campaign is finished, since there is gaming related posts on a community I created specifically for that purpose.

I'm pondering moving to Dreamwidth. Meanwhile, here are some ramblings about my time at Eastercon.

Also lots of chatting in the bar and fan room to people, including some I hadn't seen for aeons. Met some nice new people. Scattered Bristolcon flyers like confetti!

Aeons ago the BBC wiped various tapes, including Dr Who, to save money. I just found one.

I'm cataloguing old David Attenborough quarter inch audio tapes - mainly from Zoo Quest and Tribal Eye. And I've just come across one which has this crossed out on the box: 531 DR WHO "F Episodes 4 & G" The F and G are my best guess, since those have been overwritten at least twice! The words A Little Machine, 7 1/2 IPS overlap on side? may also refer to Dr Who.

After that, the tape seems to have been used for something called Lost Peace. And after that for Zoo Quest - recordings of indris in Madagascar.

I have a new addiction - mucking about making contour lines look more 'realistic' on maps I'm drawing for military science fiction RPGs. I want game maps which look like proper topographic maps, not like fantasy novel frontispiece maps. I'm using CorelDraw and making the initial pile of contours is dead easy. But then I can spend DAYS titvating things! :-)

This one unexpectedly developed a canyon and a delta... 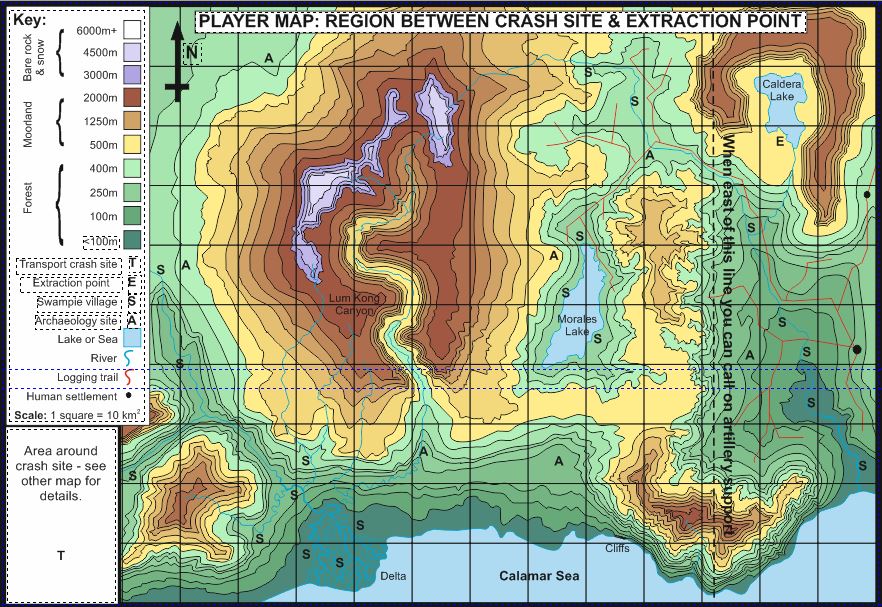 Here are the books I read this year: ( Collapse )

The Hairy Brother has just departed back to the frozen north, after a Christmas of gaming goodness.

Context for those not already in the know: I've been running Night's Black Agents, which is spies versus vampires. I'd been doing a certain amount of wailing and gnashing of teeth, because the player group is so risk averse that they'd managed about half a dozen sessions without actually finding out that vampires exist. They've seen some weird supernatural stuff (bloke on street who could be seen thru camera lens but not with the naked eye) and had a fight with a couple of ghouls. But they steadfastly refused to speak to anyone who had the potential to be even moderately threatening. So after that first supernatural encounter they haven't even talked to the non-vampiric NPCs who have a direct link to the Big Bads or Medium Bads... such as gang members, or security guards at a fur farm, or bodyguards for a Russian mobster. They've talked to rival gang members and to corrupt cops who are turning a blind eye to drug dealing, but not to any of the main conspiracy.

By the way, the first thing the PCs were sent to do was to retrive A SUITCASE NUKE from a minion of the Russian mobster. I keep prompting them with "You still don't know why the Russian mob stole a suitcase nuke from Iranian terrorists" but they (with the exception of one player) won't do any investigation which might involve them actually bloody TALKING to people. They'll hack bank accounts, they'll sneak in when the NPCs are out and bug their office, they'll sit on a church tower a mile away watching people through sniper scopes. Me having them find dead bodies of people hidden in the office basement... or indeed the 'still alilve but won't be for long' body of someone being bled out in a secret lab STILL didn't trigger a desire to grab a minion and use any of the spy interrogation and intimidation skills they have coming out their ears to ask "What the hell is going on?"

So I moaned at them they were being risk averse.

The response? They start planning to kidnap the Russian mobster. Hurrah! At last! I think. But barely into the planning session it morphed into 'let's assassinate the Russian mobster'. Two of the players took my moaning about them being risk averse to heart and met the mobster, saw vampiric powers, got into a knife and sidearm fight with his minions, etc. Great.

Unfortunately the other 2 dialled the risk aversion up to 11. They positioned themselves 1000 yards away from the action - so no risk of having to engage in a physical, mental or social conflict with an NPC. They insisted on using long range weapons (sniper rifle, explosives on remote detonator) - so they can damage the NPCs but the NPCs can't damage them. They got rid of their perfectly adequate sniper rifle & explosives, and replaced them with uber damage versions... and whinged when I wouldn't give them anti-tank weapons.

Night's Black Agents is supposed to be James Bond/Spooks versus vampires, with schmoozing rich NPCs, going undercover to infiltrate organisations, having punch ups in dark alleyways, parkour pursuits across the rooftops and car chases thru city centres. However, these players apparently want to play some sort of combination of American Sniper and Nuke The Whole Site From Orbit. So I've canned the campaign and asked them if they want to play a military science fiction game instead. I have tons of stuff where claymores and anti-tank weapons will advance the plot rather than derail it.

Life seems to be very busy at the moment. Previous few weeks have included:

Meanwhile, the BBC's promise to tell everyone if they have/haven't been accepted for voluntary redundancy by 30th November might have slipped to 8th Dec. I say might, because no-one will actually confirm or deny this, but it was kind of implied in an email about something else entirely.

Thoroughly enjoyed Armadacon last weekend. I admit that I usually go to Armadacon mainly to see the other regular attendees. I liken the con to a family wedding, where only the relatives you actually ENJOY talking to have turned up.

But this year the guests were also terrific. The panels with Nev Fountain and Rob Shearman were fantastic Dr Who themed geek outs, while both Colin Baker and Michael Jayston entertained us with tales of shenanigans from the theatre and television. It was also interesting to hear actors' perspectives on the way television has changed in the last few decades (no rehearsal time any more!). David Wake was also as entertaining and informative a speaker as usual, and he won the Masquerade by simultaneously appearing as both Colin Baker's Doctor AND the Valeyard. And Andy Lane did a great presentation on writing, with an ongoing in joke that Stephen Moffat never writes or calls him any more.

Following on from it's success last year, Friday night was Armadacon Unplugged, organised by Roz and David. This year I recited 2 poems (The Horses by Edwin Muir, and The Ambulance Down in the Valley by Joseph Mallins), read an excerpt from my short story in the Para Animalia collection and led the singing of Alien Encore by Leslie Fish (the plot of the Alien movie to the tune of What Do We Do With A Drunken Sailor).

I rediscovered The Horses by Edwin Muir when it was read on Radio 4's Poetry Please. I recognised it as something I'd heard at school, and I think it is probably the evolutionary ancestor of my Horse Chosen roleplaying game.

I remember ranting about Dream Sequence a while back, so I guess this is rant number 2!

I don't object to the character having the Secret. I DO object most strongly to them having viewpoint scenes where they think about The Secret as a concept, rather than thinking about the facts/actuality of the secret as they do with any other bloody thought in their head. Basically, the author is trying to conceal the Secret from the reader, presumably so they can have a big reveal later. But it is REALLY ANNOYING when character think things like "If my wife knew my secret, she would leave me" rather than "If my wife knew about my mutant superpowers she would leave me".

Authors - stop constructing your damn books like a TV series! If we're in the character's head, tell us the damn secret.
Collapse